Astronomers have detected what appear to be enormous ‘invisible’ structures located 3,000 light-years from us and moving 50km per second across the Milky Way 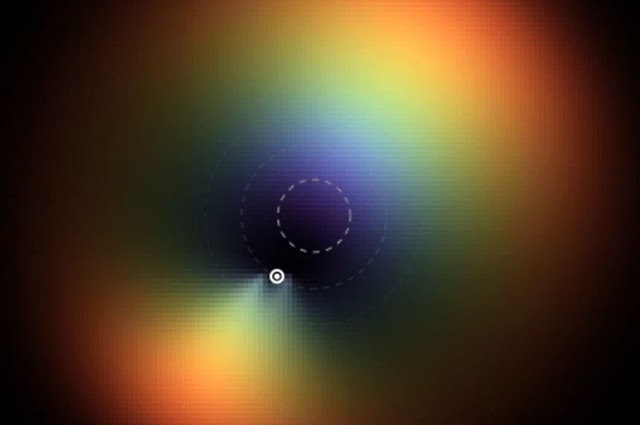 Photo credit: Shown is a still from an animation of the lensing effect produced by the structures. Keith Bannister (CSIRO)/Artem Tuntsov (Manly Astrophysics)
Astronomers have discovered invisible structures lurking in the interstellar space in the Milky Way. Although previously, researchers speculated these invisible structures exist, the new study, published in the Journal Science will help astronomers contain their size and shape much better.


According to reports, these things are HUGE – roughly the size of planet Earth’s orbit around the Sun – and could prove to be helpful in explaining where the missing matter in the universe is. The detection of the ‘invisible’ structures was made thanks to researchers at the CSIRO’s Compact Array telescope in eastern Australia. The discovery of these giant structures might help scientists explain the mystery surrounding a distant quasar (a mass of energy and light) and why it appeared brighter in radio telescopes over three decades.
However, researchers warn that these aren’t big solid objects though. Astronomers state that these mysterious structures appear to be clumps made of some sort of meatier, even possibly clouds of extremely cool gas, in an existing thin gas that is found between stars. Astronomers have described the shape of the mysterious invisible structures as “noodles” or hazelnuts – with material on the outside and a hollow center.
Where these mysterious structures come from, their exact age, purpose and the exact number remain a great mystery for astronomers.
Where they came from, how old they are, or how many there could be in our galaxy remains a mystery, though. “It’s all guesswork at this stage,” lead author Keith Bannister of CSIRO told IFLScience. “There could be many thousands of these in the galaxy.”
Astronomers are positive to have identified the speed of the structures. According to initial studies, the invisible noodle-shaped structures are travelling at a speed of around 50 km (30 miles) per second through the interstellar medium. The structures so far detected by astronomers are located at a distance of about 3,000 light-years from us, a thousand times farther than the nearest star, Proxima Centauri.
Even though it’s really interesting to know that these structures are there and are moving relatively fast across the interstellar medium, the more exciting part of this discovery is that according to astronomers, these previously unseen structures could be accounting for a large fraction of hidden mass in the Milky Way.
Bannister noted that these anomalous structures have nothing to do with dark matter.
While no one has mentioned the word ‘Aliens’ yet, we are sure that given the mystery behind this incredible yet enigmatic finding, it won’t take long for the story to rise to another level where ‘Aliens’ might become a viable option for many.
While there are numerous enigmas surrounding these invisible ‘noodle-shaped’ structures that are traveling at 50km per second across the Milky Way, these structures are real and our observations are a major step forward in determining their size and shape,” says Bannister.
Source article
Geplaatst door Meline Lafont op 12:29:00 PM