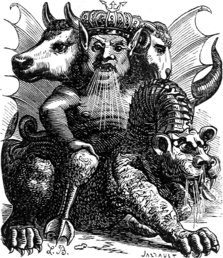 In the past weeks and the coming weeks there is a lot of heavy stuff going to be confronting you. Willingly or unwillingly you will be faced with the demons you not yet have been facing. It is about you becoming aware of the things that you had stored away in your not to be opened vault.  To many people are still wanting to say do not react or respond to certain things but in that you release also necessary triggers for change and letting go.

Change can only be found in being confronted by yourself or by others with things that you or others have been hiding in their demon section. Therefore not allowing to be confronted or confronting yourself is the same as not wanting to get rid of your demons. You seemingly were not able for so long to get rid of you dark side so it needs to be taken care of now. This is what will happening on personal as well as group and meta-level.

Structures that have been built on the extreme polarized basis will have to be aware to be confronted on that. Those structures will be forced to get back into balance. It is that what is happening now as those structures keep failing to pull certain agendas through. The need for more and more failing hidden agenda alliances will make their efforts only go into more and more balance.

It is that what a lot do not see. The learning effect is often not the direct confrontation but the realization afterwards that makes things move into more and more balance. The fight for the financial system to be kept as it is is one of those aspects that will change. Only things working with all together and for the best of all humans and the planet are going to be allowed to manifest.

The push and pull effect is still going on till the balance is found. 2014′s first quarter is one of many revelations as well as the showing of agendas and the showing of faces.  All is well as it is part of the  finding balance process. We see activism and truth seekers thrive as never before… We see big ego’s on the stage and events like the World Economic Forum held. All is nice contrast.

I observe this big display of arrogance and celebrations of out of control structures and certain groups of humans thinking to be in power over humanity. These thought and celebrated victories are short-lived in this changing paradigm.  If the reality will not find its way into their camps, they will be confronted with all the energies attached to that and pulled out of it forcefully.

Be prepared to see actions, re-actions and also lots of newly self empowered humans that will not stop at petitioning or others to change things for them. People want change in the structures that manipulated their lives. The banking and finance sector, governments and parliaments, religious oppression,  constitutions, laws, agreements and contracts or (legal) documents that have only one thing in common to enslave and separate you from your inner power.

The changing  happening as we speak is unstoppable and irreversible.  It will go one and you can go with the flow, balance or be pulled into extremes you will not be able to handle anymore. Also in the bigger picture level all is on the move. Running away is not the choice as the invisible plastic band around your middle will pull you some how back in and confront you again.

We are changing humanities future here and now as we came here all to do that. We will make it happen and dark and light will balance to become the neutral peaceful state the new for all can derive from. See you all at the round table to make your acquaintance!  When ready and having found your balance within.
The hand of peace is always open to embrace your hand and shake it as human fellow travelers on the same path to resolve duality and create unity for all beings. Being individually in power, free and in balance.  We will face our demons and transform them all. In the end all that what was extreme just becomes an expression of both polarities in balance.
Love and Light,
Lucas

Times are changing and sometimes harsh for those trying to do everything in service to all: therefore a donation would be appreciated today. Be generous if you can to keep things going!
The blog donation button is on the main page on the right. Think also about supporting those other lightservers in serve to all. Thanks!
(c) 2014 –  Copyright of Lucas, all writings of Lucas maybe published, re-blogged and posted only in full without altering anything with  thehttp://www.lucas2012Infos.wordpress.com  link  mentioned in the article with name of the author Lucas.
Geplaatst door Meline Lafont op 2:21:00 PM