Lucas – Into Giving The Just Awakened Self Away Again! – Finding Grace and Integrating Within – Seeing and Feeling The Change – 28 July 2013 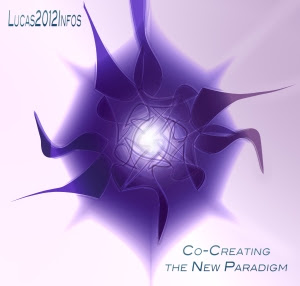 From my observation post somewhere around Earth the insights in people’s psyche and understanding the non-logical decisions is something that feels strange and at least odd.  People got awakened in seeing the system and everything that was as lies and fraud. Then they go into activism and wanting to make a change on the outside, the system. They got later on out of their dogmas and beliefs from their upbringing, education and religions. They got even detached from the guru’s and teachers telling them a certain method or way was the right one for them to be or become…  Then there came some newly equipped mind-controlller along that had been in the spell of the divines and we got a new sort of guru or teacher born.  Nothing divine about it as it is just leading you again away from your own power as that is given away to this new sort of guru, teacher who says to connect you with aliens as you are part of their group.


My questions to your would be , if there was a group somewhere outside your earth that was more advanced as you, would they ask you to get to their level before connecting in “flesh and blood” so to say with you? If you say yes, think again!  I think the real outer earth world connections are here to observe foremost and help in an other ways earth and humanity and they have no control over agendas. Those real aliens will not interfere with the free will and our own tasks we have to fulfil here upon earth. They will not compromise that in any way.  There are of course  real connections with our outer space brothers and sisters but not in the way “the divines” would us belief to connect to “aliens”.   So think twice in  changing again your just found awakened inner power  to some outside of you force that says you need to do all sorts of things that would free you and will give you certain powers.  You need no new spells and bounds nor a new master.
For those that found their inner power and not let themselves being lead astray again there is lots going on. Now is the time of integrating opposites. You will be bounced against the virtual wall till you might decide to not see the process as just integrating one part of you but also integrating the part of you that you might not like, that is painful, that hurts, that is ugly and dark.  Nothing  can become  whole in denying all parts to be integrated.  The choice is yours to deny or ignore but you will hit that wall sooner or later again.  We need not be scared of the ugly, the pain and unease that is coming with those parts of you also  wanting to integrate. It is just a process.
The ones going through their processes are reporting the changes in their inner-self as pressure felt on their foremost higher chakras. It can feel as static energy  also. People feel the shift also in being like two bodies in the one moving out of sync, shifting. You can experience shaking of your body or tremors.  You can have lucid dreams or have dreams that are even go on while already awakened from your sleep. It can be experiencing bi-location (being or feeling to be in two places, sometimes even more places in the same moment) or having other dimensional experiences. Also people are learning to use their new abilities like telepathy, greater empathic connections, etc.  It is all happening now. That is the inner change that is seen and felt by you.  But the outer change is also seen if you feel your way through the illusionary chaos that is still shown to you.
If you really see the new already forming and see  the new projects for change popping up everywhere.  If you see people making clear their new intentions for the new paradigm.  If you see the new developments and even feel the anticipation that something grand is going to happen. If  you are feeling and seeing the new world emerging now.  Then you see it is all in process even when I write now. The change is brought alive behind the scenes as well as in plain sight of you. It is up to you to change perception and see things in  a new modus.  It is time to see the new timeless and unified space that will be your own and our unified new sketch book for a new world, a new paradigm. We are almost there and the last efforts are always tiresome and not easy, but know you are never alone. There is always support and help, but know it is you that needs to conclude your process as it is not done for you.
Let us not be hiding from our counterparts of polarity that still not step over the line into unity.  Let us be open and transparent as we need to show and be the way ourselves  in being the example. If you know what is needed to come together than act as people who want this and not as people who still separate their counterparts from their world.  Let us open up and be the love to those still being opposite. We have our place for them reserved to come and sit together with us around the table in peace and harmony.
Thanks and love and light to you all in all shades. Let us get in the middle, the center of all that is. Be One with all in our own individual and collective power.
Lucas
Think also to support the blog during the summer. The funds are critically low so every bit that can help to keep things going are welcome. So even when you are abroad or having some rest and fun, the blog is still there for you!
You can find the donation button on the lucas2012infos blog’s main page or donate via PayPal  via lcspeciaaladres ( @ ) gmail. com put in also the reference:  lucas2012infos blog donation. Think also to donate to  those other truly inspiring websites and blogs, freely for you kept as lights on the firmament to help you on your journey with inspiration, knowledge and joy. In gratitude to you all. Lucas
(c) 2013 –  Copyright of Lucas, all writings of Lucas maybe published, re-blogged and posted only in full without altering anything with  thehttp://www.lucas2012Infos.wordpress.com  link  mentioned in the article with name of the author Lucas.
Geplaatst door Meline Lafont op 8:59:00 AM